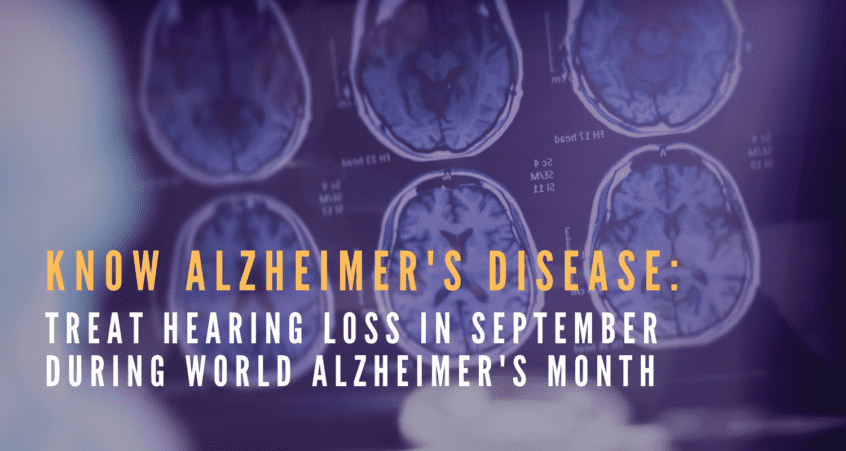 September is World Alzheimer’s Month, and what better time could there be to remember the link between dementia and untreated hearing loss? Medical professionals all over the world are catching on to the importance of treating hearing loss in order to help prevent or delay dementia and Alzheimer’s, not to mention the general improvement in quality of life that hearing aids bring with them. Take a note from Alzheimer’s Disease International (ADI) and take the necessary steps this month to treat your hearing loss.

What Is World Alzheimer’s Month?

Dementia is not a normal part of getting older, it is a serious health issue. It is one of the largest social care and health crises we face today. Alzheimer’s disease is the most common form of dementia. During World Alzheimer’s Month, ADI promotes knowledge about dementia and the net negative effects it has on society. The goal is to bring the importance of treating dementia front-and-center for world leaders and people of all stripes, so we can work together to hopefully put an end to dementia.

A report in Lancet last year named hearing loss as the most significant modifiable risk factor for dementia. This puts it at the top of a list of twelve risk factors, including:

Lancet’s research indicates that as many as 40% of dementia cases are preventable or delayable, and treating hearing loss is the single most significant step a person can take to reduce their risk of developing dementia. Studies have shown that the risk of developing dementia increases proportionally to the degree of hearing loss that a person has, in the following proportions:

Most cases of dementia and/or Alzheimer’s are not preventable by any means we currently know about. There is likely a genetic component to most cases, but the gene may require certain environmental conditions to be met in order to become expressed. We do know that having a family history of dementia makes a person three times more likely to develop dementia than someone who has no family history of it. Early-onset dementia has a stronger genetic link, with 50% of children of a parent who develops early-onset dementia also developing it.

While preventative measures are hard to prescribe for those who are not among the most-at-risk, ADI does note that mounting evidence suggests that a healthy lifestyle is the best defense against Alzheimer’s and dementia. ADI defines this as “eating a healthy diet and staying physically, mentally and socially active.”

How Do Hearing Aids Help?

According to current knowledge on the link between hearing loss and dementia and Alzheimer’s, there may be a number of ways that hearing aids help. The most direct way they do this is by delivering more information to the brain.

When we talk about treating hearing loss, that’s really what our goal is: to help more information get from the environment to the brain. The human brain takes in billions of bits of information from our ears every second, processes them, and delivers them to short-term memory. Often when we think about the problems with hearing loss, we only think about the difficulties we have understanding speech. While that is a major concern, it’s only part of the problem for our brains.

As we continue down the path of untreated hearing loss, the auditory cortex in our brain begins to atrophy. The structure sort of collapses. It’s not that the brain cells die, but the grey matter that holds them up begins to shrink in size. Eventually, we lose the ability to decipher speech even when it can be heard clearly. The auditory cortex can be trained back into action once we start wearing hearing aids, but it takes some time and effort.

This kind of brain inactivity, combined with the additional losses in brain activity from the lack of social experiences that tends to accompany hearing loss, provides a real opportunity for dementia to set in. Untreated hearing loss not only starves the brain of information directly, but also opens the gateway for decreased social and physical activity, depression, and social isolation.

If you or a loved one is dealing with untreated hearing loss, take the opportunity this World Alzheimer’s Month to make an appointment for a hearing test and find out what hearing aids can do not only for your health, but your happiness and well-being.